Background: When Desert Troon Companies became the new concessionaire of Scorpion Bay in Peoria, Arizona, its intent was to transition the property from functioning primarily as a marina into a floating community with plenty of activities centered around its two biggest assets: sunshine and water. As a culmination of Smidge Design’s rebrand of the community, the site needed to let users know that not only did Scorpion Bay offer world-class marina services for storing your yacht, but it also has different watercraft and skis for full- and half-day rentals, a destination floating restaurant and bar, a general store, a rotating events calendar featuring live music, and opportunities for both private charters and private events.

Design core: This site has a lot of jobs to do. The content structure is very key in getting users to the information they are looking for as quickly as possible. In order to create a hierarchy to guide the user’s attention, we offer a couple of ways to navigate. There’s the main navigation, but really the mininavigation on the right side has the most important pages immediately accessible with no need to dig around. And we keep tabs on our analytics and heat-mapping strategy to ensure users are finding their way through the site quickly and efficiently.

In terms of design elements for our broad audience, we wanted to immediately transport users from their device to the lake and within a few seconds speak to both the person who’s looking for speed and adventure and the person who wants to chill on the patio with a cocktail and 360-degree mountain views. The site also needed to communicate a sophisticated yet approachable feel that’s a hallmark of all Desert Troon lifestyle properties. We think the homepage video plays a huge part in this.

We worked hard to push both design and animation features as far as we could while still keeping load times fast for a site that gets so much daily traffic. The site also takes advantage of idle time to load deferred things people won’t see right away.

Favorite details: From the design to the dual navigation and animation integration to the tone of the copy, we’re proud of a lot of things in this site. It took several design iterations before presenting to the client to strike the right balance between modern and sophisticated with subtly nautical elements like patterns, flags and colors. Even the italic modern serif typeface with the swipe navigation in the menu feels watery to us. We also love how the restaurant, Scorpion Bay Grill, with its own subbranded identity also by Smidge Design, is integrated into the site and feels connected to the overall Scorpion Bay brand through typeface selection and photographic style.

The rentals page is a favorite not only for the design and functionality but also for the process of how it evolved from concept to execution. In addition to beautiful imagery, we wanted to put our audience on the water, in action, whenever possible, showing them exactly what you can do on each watercraft as well as understand the scale of the boats with the videos and a video/stop action feature that makes the photos “come alive.” This page was truly a meeting of the minds, and it’s so gratifying when you find that perfect scenario where designers and developers come together to make something as beautiful and interactive as it is functional—and vice versa.

Challenges: From a logistical and creative perspective, it was gathering all the video and photography. Scorpion Bay was a newly acquired property for our client. Everything prior to the acquisition was outdated, so we literally began this project with zero assets—but who doesn’t love the opportunity to start with a blank slate? Several shoots for both still photography and motion had to happen before the site could go live, some of which was shot using strategic timing and angles because it was during renovations. We quickly learned that shooting on a lake came with its own set of challenges, and we had to plan for a certain amount of “unplanning.”

Weather was one challenge. The lake can be windy during some of our most epic Arizona sunrises and the rain that can happen during monsoon season is always a bit unpredictable. The wind caused us to make a new plan on several occasions. Water was another (literally) moving consideration. The entire marina is floating, so when shooting still photos of the space or of food, there’s no locking off the camera. Everything bobs up and down a tiny bit: the camera, the subject and us! Most of the video was captured shooting one boat from a second chase boat. The lake is a busy place, and every take was different. As long as we knew the primary content we were getting was telling the right story, we forced ourselves to go with the flow and capture what was happening around us.

Technology: To be honest, the tools used on the site are pretty standard. It’s really about the way we used them. When we started this project, we knew Scorpion Bay would be in an evolution phase for a while during renovations and as they add amenities to the community. The cleanliness of the code is what helps the site expand and contract so easily. It’s built in a clean, don’t-repeat-yourself way. And the use of flexible content modules allows us to build virtually any page we want in a modular way, which will make future additions and modifications to the site more efficient. 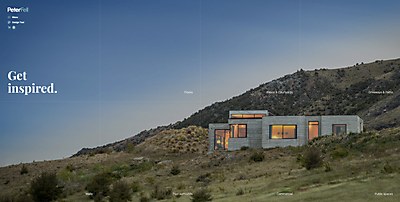 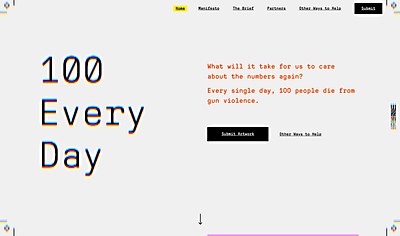 Webpicks / Politics/Social Issues
100 Every Day
This site by Van Holtz Co. for Ueno and Good Measure encourages creatives to raise awareness on daily gun deaths in the United States. 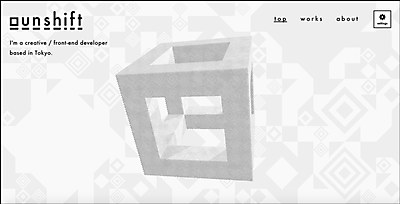