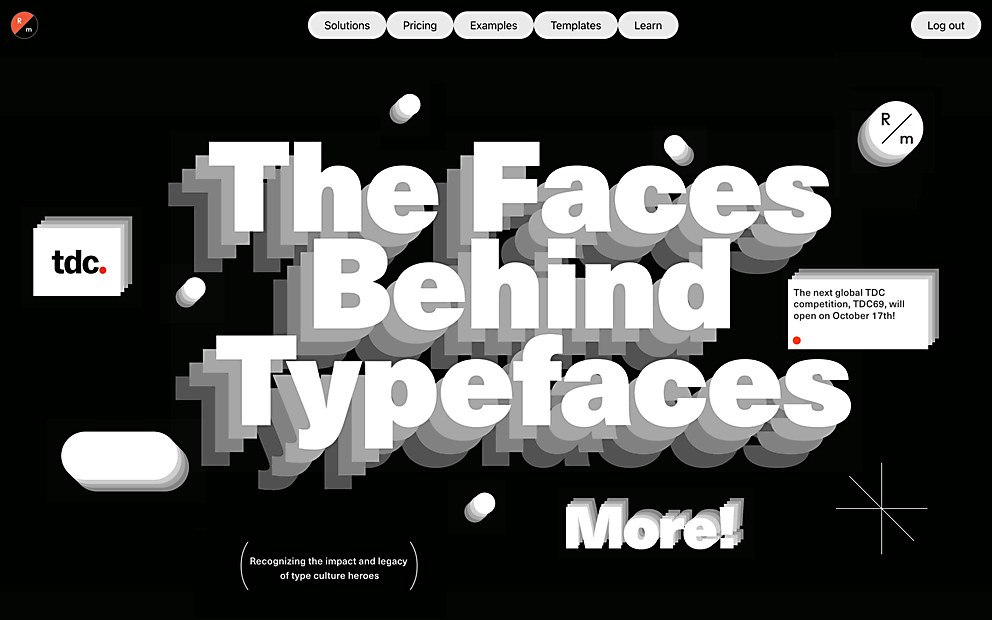 The Faces Behind Typefaces

Readymag and the Type Directors Club honor the legacy of the organization’s medalists with this in-depth look at their typographic work.

Background: “The Faces Behind Typefaces was created by the Readymag team in collaboration with the Type Directors Club (TDC), and its concept reflects both our missions,” says Alya Datiy. “Besides building a tool for designing websites without code, we at Readymag strive to foster self-expression and recognize excellence in the practice of design. The TDC, now in its 75th year as the world’s leading type organization, focuses on the cultural power and impact of typography.

“In this project, we wanted to highlight the impact of typography heroes and pioneers through the eyes and words of up-and-coming type and design professionals,” Datiy continues. “The TDC bridges the gap between type culture past and present, and through our editorial and design expertise, we did our best to highlight and explain this connection. Our target audience is everyone who believes that exemplary creative work should be promoted and that knowledge should be shared—and appreciates a good story backed by a fun layout. Typographers and designers especially will find this project insightful.”

Larger picture: “On September 12, 2022, the TDC announced the year’s TDC Medalist, an award that recognizes individuals and institutions who have made outstanding contributions to the field of typography. ‘The Faces Behind Typefaces’ was planned to coincide with the announcement and give further insight into the award’s significance,” Datiy explains. “On that note, the site includes an interview with Akira Kobayashi, Monotype creative director and 2022’s medalist, as well as profiling notable and memorable medalists of the past.”

Technology: “The website is built entirely with Readymag—created with zero code—and is part of our ongoing strategy to showcase Readymag’s capabilities and latest features through our self-produced projects,” says Datiy.

Design core: “The website resembles the TDC style in terms of used colors, the rigor of the typography, and a system of letters and rulers broken by animated objects,” says Tatiana Egoshina. “It also demonstrates Readymag’s design capabilities, particularly with animation and custom cursor features.

“Originally, there were two draft versions of the site: the first colorful and cheerful, and the second two-colored and restrained,” Egoshina explains. “We chose the latter since it met both the solemnity of the editorial concept and the TDC Medalist announcement itself. Then, it was crucial to pick the appropriate typeface and fonts. Ultimately, we opted for the infallible Neue Haas Unica, a time-tested typeface with various weights. It was a real challenge to keep the whole editorial readable, uniting the different styles of all heroes in a single structure. To make the design blend in with their various styles, we decided not to place the active graphic elements next to the heroes’ works; instead, they appear on the intro page and the chapter covers.”

Favorite details: “The animated chapter covers are what I’m most proud of,” says Egoshina. “We did our best to encode the content of each chapter with graphic elements while ‘quoting’ elements of the heroes’ work. In addition, the covers have quite tricky animation settings with objects that respond to cursor hovering.”

“First and foremost, The Faces Behind Typefaces reflects the spirit of the TDC itself; it’s all about different voices shaping the culture of type design and empowering designers with a sense of belonging,” says Tatyana Kovalchuk. “One of the editorial’s heroes, Douglas Davis, spoke of Ed Benguiat and mentioned that he taught by example and through storytelling. Learning without actually being taught is exactly how we, as the editorial team, approached the project concept: we strived to unpack the legacy of the TDC Medal and past medalists through storytelling without a preachy tone, encyclopedic references or dry timelines. Actually, the website has one timeline, though I hope that me and my colleagues and fellow editors Bazhena Gurlenia and Tsvetelina Miteva managed to make it engaging and valuable.”

Special technical features: “The Faces Behind Typefaces illustrates Readymag’s capabilities in its multistep triggered animation that appears on scroll, on load, on hover and on click. This lets creatives make interactive visual effects without coding,” says Egoshina. “The other feature I’d like to mention is a custom cursor, a Readymag widget that lets you add a unique cursor throughout the whole website or just for certain elements. The red round cursor in this editorial references the red dot of the TDC logo.”

Navigation structure: “When we created the website’s navigation, we wanted to keep a structure similar to a book so that readers could easily go back to the contents and open any chapter,” Egoshina says. 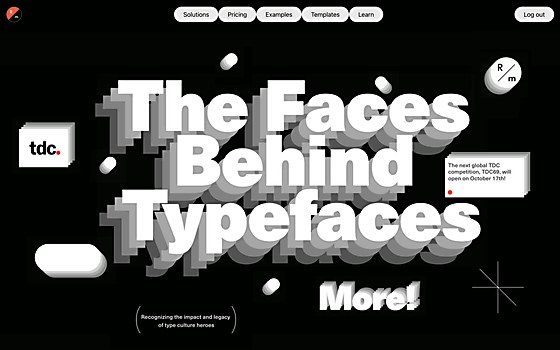 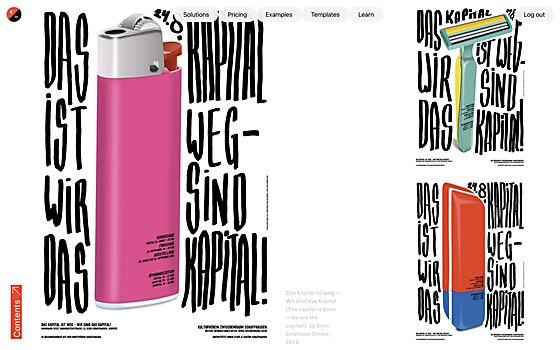 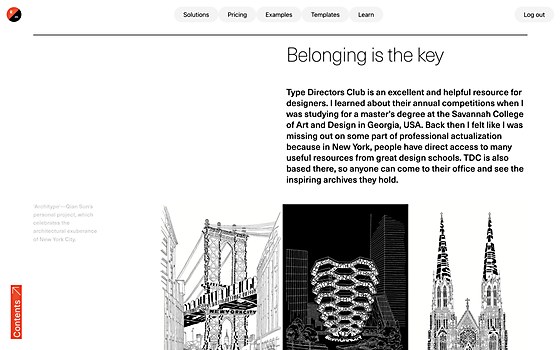 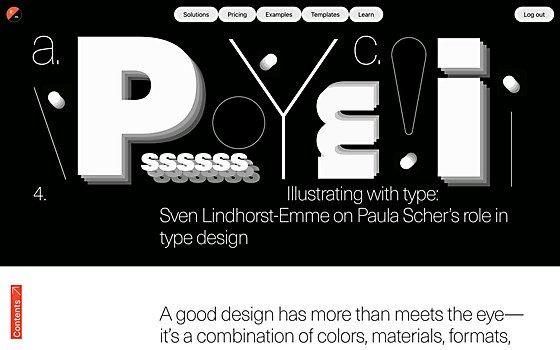 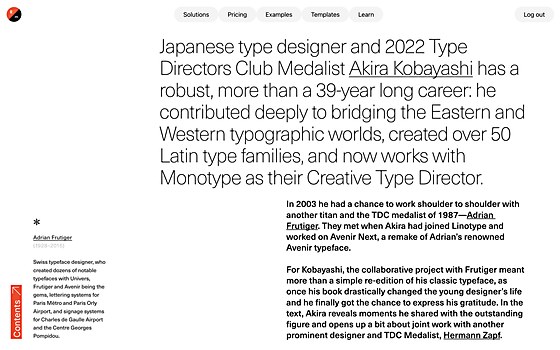 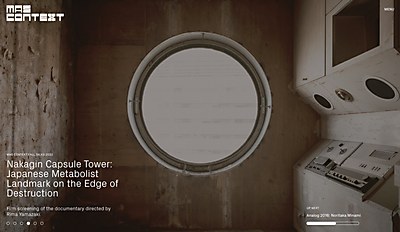 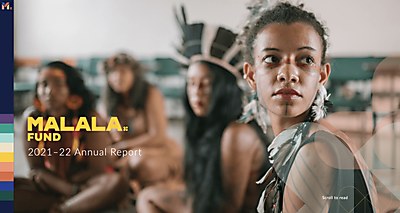 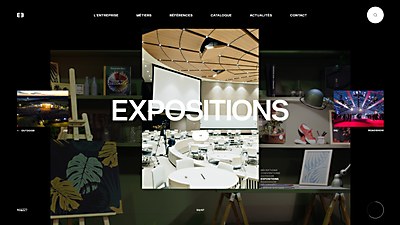